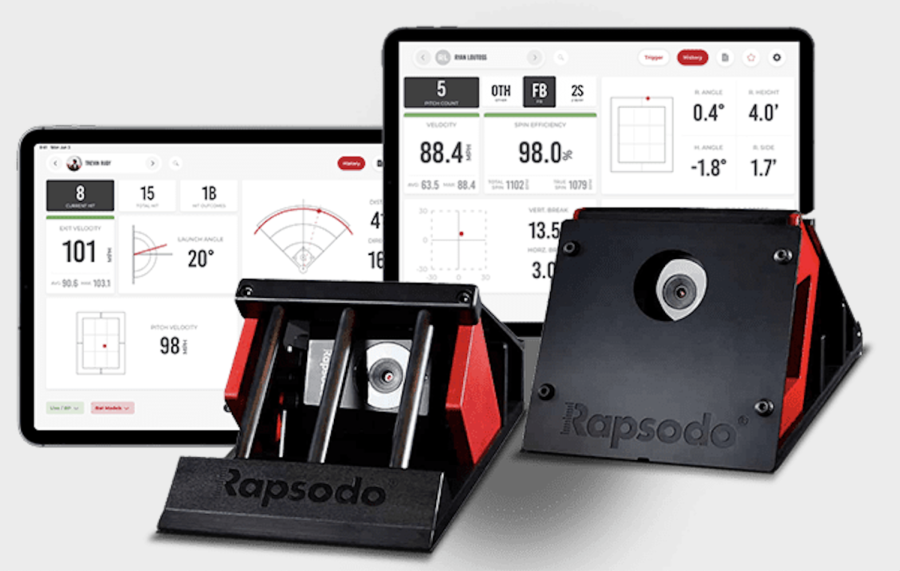 In the upstairs batting cage at Concordia University Chicago, pitchers stretch and complete their throwing routine prior to their preseason bullpen sessions. Pitching coach Matt Smith rolls out a box, takes out the Rapsodo Pitching 2.0, and places it fifteen feet from home plate. After a few taps on his iPad, a green light flashed back at the pitcher prior to each pitch.

For the next hour, pitchers took turns throwing bullpens, which was nothing out of the ordinary. Any casual baseball fan could probably identify whether each pitch was a ball or a strike. But Smith and his players see the bullpens differently, with numbers, decimals, statistics and images at his fingertips, reflecting the current evolution of baseball training.

The Rapsodo device combines old-school methods of tracking statistics and biometrics with state-of-the-art motion cameras and radars. Pitching coaches no longer need to stand behind home plate with a radar gun to track pitch velocity. Within seconds following a swing, hitters obtain in-depth statistics that act as a second coaching tool. “Our pitching staff has grown significantly because of the extensive data for each pitcher,” says Smith. “The work these guys have put in during their training sessions is a direct correlation to their efficiency on the mound when it matters most. The numbers don’t lie when it comes to training.”

Rapsodo, a division of Diamond Sports, launched their original Hitting and Pitching products in 2010. Over the last decade, all 30 Major League Baseball teams, plus over 1,000 colleges, 175,000 players, and 7,000 coaches implemented Rapsodo into their team training. “When developing these products, we asked ourselves ‘How do we democratize this data, and get it into everyone’s’ hands?’” says Rapsodo product director Seth Daniels.

Daniels was the only member of the development team based in the United States when the company started. The rest of the team resided in Singapore, which came with its challenges. “It’s hard to explain what a baseball player needs with technical engineers and software developers who may not fully understand baseball, which was evident in some functional issues with the early products,” says Daniels. “With Hitting 2.0 and Pitching 2.0, we took the feedback from coaches and players and made sure they could get the most out of our training with our product.”

The first generation Hitting device sat in front of home plate, while the Pitching device sat behind the catcher, which sometimes allowed protective netting to interfere with the cameras. The updated versions sit facing the front of home plate, where an improved radar senses the ball’s movement, and the camera takes hundreds of photos for the receiver to analyze on a three-dimensional scale. For pitchers, each pitch is identified, along with velocity, spin rate, spin direction, spin angle, and location. Hitters see exit velocity, launch angle, hit distance, hit angle, and total spin.

The Deep Learning Model works with the photos taken during each pit or hit to pinpoint the location of the ball and strike zone. Hitting 2.0 and Pitching 2.0 also require minimal setup, as the operator must turn on the product and connect it to the Rapsodo app. “It [Hitting 2.0] looks better and performs better from where it’s at now,” says  Riley Rundquist, a first baseman on the Heartland Community College team in Normal, Ill.

For a hitter, understanding the metrics helps to shape and improve their swing. A swing with negative launch angle degree means more air under the ball and increases the likelihood of a fly ball. Hit angle and direction visuals display a path from ball to and from the bat. This helps hitters identify if they’re pulling the ball, or need to keep their hands inside to hit toward the opposite field.

Pitchers use the graphics created by the Pitching 2.0 to gain greater insight on how subtle tweaks in grip and throw affect the ball’s trajectory. Every pitch moves differently, which means pitchers must understand the path, spin direction, and spin angle of the ball.

All these statistics pop up after each pitch or hit in the Rapsodo app. With individual profiles, players and coaches can track training progress and identify areas of improvement. “At the start of the winter, my slider sat at 75 mph with not much break,” says CUC pitcher Chandler Kerr. “After seeing that my spin rate was low, 1,800 rotations per minute, I worked on my grip and arm slot to allow my arm to throw it harder. By my first spring bullpen in March, my velocity was up to 78 to 79 mph consistently, with more horizontal break because of my increased spin rate.”

Kerr finds himself using the Rapsodo as often as he can during throwing sessions. Whether it’s a bullpen or live at-bats, the results continue to provide feedback needed to take Kerr’s game to the next level. He also appreciates the more in-depth conversations with his coach as a result of the metrics and images he sees. “There are somethings Coach [Smith] doesn’t recognize until he looks at my numbers,” he explained. “Some days my fastball velocity is down, which can be supported a radar gun. With Rapsodo, I can see by my arm slot, spin rate, and direction that I’m short arming pitches causing for a drop in accuracy and speed.”

Both the Hitting and Pitching 2.0 systems cost $3,000 each. “With our budget as a Division III school, we invest a lot of time into researching the equipment we buy for our program,” says Adam O’Malley, assistant coach at Benedictine University. “Our Rapsodo products are the most valuable asset to our training program, without breaking our bank account.”

This emphasis on metric and statistical training tools has trickled all the way down from professional organizations to high school and travel ball teams. With young players looking to achieve higher exit velocity hitting or pitch velocity, the information produced by Rapsodo continues to gain attention when it comes to amateur player development. The Illinois Indians, a travel team based in Mount Prospect, Ill., have used the Pitching 2.0 for two seasons as part of their winter training. “Having these products in our facility and getting our kids accustomed to understating what each statistic means is a game changer,” says Illinois Indians coach Mike Pugliese. “Our guys are not only growing physically, but also mentally since they understand the deeper parts of the game.”

Rapsodo has been developing a third generation system since 2017, Daniels says, but the company has not yet announced a release date. The dual unit would combine the Hitting 2.0 and Pitching 2.0 into one device. It would resolve the current problem of hitters and pitchers not being tracked at the same time. The product will also create a three-dimensional model of each pitch and swing from batters. “The goal for Version 3 is to educate players more about their game with visual aspects,” says Daniels. “It’s one thing to say a number to a player, but giving them the reason and images to back up the data is big time. That’s our ultimate goal: education and player development.”