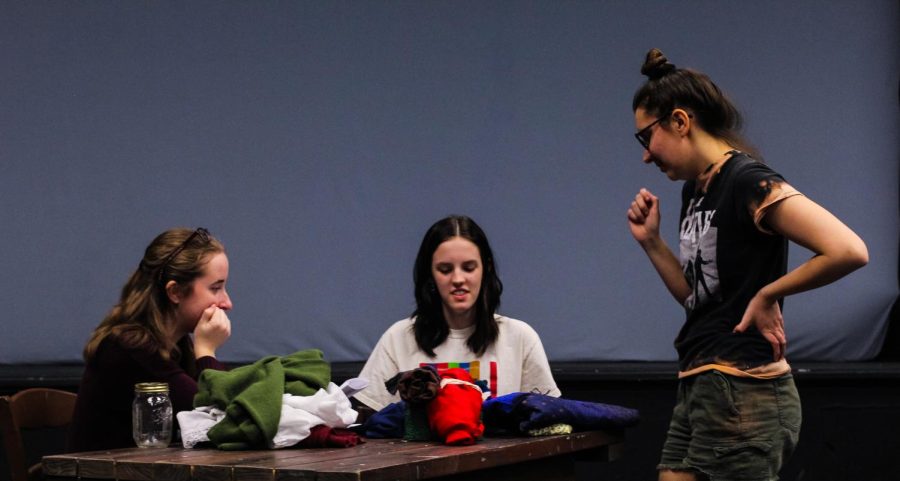 Actors Katherine Sievertz and Rachel Bachman discussing a scene with director Hannah Sochowski in preparation for this weekend's performance of "Trifles" by Susan Glaspell.

Concordia University Chicago seniors Hannah Sochowski and Emil Clausing will showcase their directing skills this weekend for the double production of the one-act plays Trifles and A Kind of Alaska.

For CUC’s remaining theater majors, the performances serve as a capstone project to allow them to produce and direct a work of their choosing.

“Having some experience helps,” said Clausing. “I’m not totally out of my comfort zone, but this play will be my first full-length experience in directing.”

Trifles is a one-act play written by Susan Glaspell in 1916. The play deals with the investigation after a woman allegedly murders her husband. As the authorities search for evidence, a group of women uncover the true reasons behind the murder.

“When I was told about this play, it really wasn’t my thing because I saw it as just a murder mystery,” said Sochowski. “Then I read it, and it’s about justice, feminism, abuse, and this idea of who to blame, which is really what stuck with me.”

Sochowki has performed as an actress at CUC since transferring two years ago. Most recently, she acted in and worked as the assistant director of the recent production The Women of Lockerbie.

“What I love about it is seeing actors discover things,” said Sochowski. “I like seeing those moments of discovery and seeing others’ ideas play out and being able to guide that.”

Written in 1982 by Harold Pinter, A Kind of Alaska centers on a middle-aged woman who wakes up in the 1960s after a thirty-year coma. Throughout the play, she has to come to terms with an unchanged state of mind and an aged body in a changed world that she once knew.

A Kind of Alaska also deals with the exposition of pandemics and sicknesses of the 1920s, which Clausing felt still relates to us during the COVID-19 pandemic.

“I knew I wanted to do a Harold Pinter play,” said Clausing. “The motifs and the movements of his plays aren’t something you’d expect to see in real life.”

Clausing has acted in a several stage performances at CUC, while also appearing in a couple of short student films on campus. During the pandemic, he was able to get his first experience directing in class, but nothing that compares to his production of A Kind of Alaska.

Performances for these one-acts are scheduled for March 25 and 26 at 7:00 p.m. in CUC’s Bergmann Theatre on the second floor of the Krentz Center. Admission is free and will feature an intermission between the transition of plays.