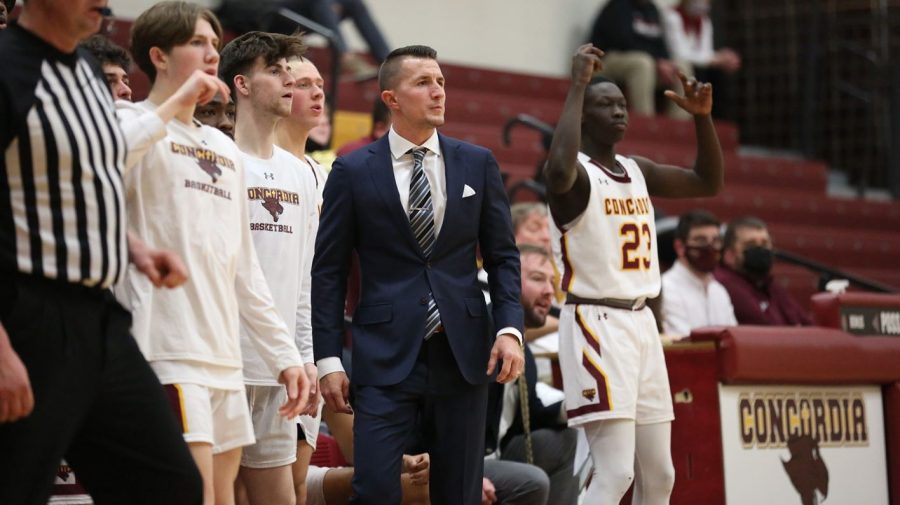 After a 3-6 start to their 2021-2022 season, the Concordia University Chicago men’s basketball team seemed stuck on the wrong side of the standings. Yet the team came together and turned their season around, ending in first place out of 13 teams in the Northern Athletics Collegiate Conference (NACC).

The Cougars finished the season with a 15-10 record, including 11-6 in division play. In fact, this year marked the first time that the Cougars won double digit games since the 2011-2012 season finished at 10-16, which at the time earned them first place in the NACC.

The winning record in 2022 was a complete flip of the script from last year, when CUC stumbled to third in their division and ninth in the NACC conference with a 5-11 record. “I think the biggest reason was our guys just taking ownership,” said head coach Steve Kollar. “We weren’t really doing all the little things, which is a big difference between winning and losing.”

Between the 2021 and 2022 seasons, players worked to get stronger and practice their jump shots to perfect their form. “I knew if I could do those two things, I could be a bigger threat on the offensive end,” said sophomore guard Justin Greenlee.

CUC’s low roster turnover in 2021 also contributed to the team’s success. The Cougars were able to bring back many of their best players from last season, including a few players who used their extra “COVID year” of NCAA eligibility. “We all matured and got better this off-season to elevate all of our games,” said senior guard Izak Ruddell. “Personally, I worked on my body and building muscle and a bigger frame. In the gym I worked on shooting off the dribble and developing a more consistent jump shot.”

After a 56-88 loss to Trine University on Dec. 30, Kollar credits a specific session analyzing the game film as the turning point that helped right the ship. “We basically didn’t say anything,” said Kollar. “We let the guys all talk, we talked about it and kind of had a heart-to-heart.”

Kollar focused on cutting down turnovers and rebounding the ball better. On a game to game basis, Kollar looked to exploit their advantageous matchups. Kollar put also more trust in the taller players, because of their ability to move on the perimeter. At the same time, the CUC guards used their quickness to get to the rim on teams that played a bigger lineup.

After the new year, CUC proceeded to win eight out of their next nine games, including a five-game winning streak.

A series of injuries and a team flu outbreak forced CUC to scratch 12 players for several of those games, but the team used the “next man up” mentality to grind out wins.

“We knew that we had potential but it all could be wasted if we didn’t put the work in on a daily basis,” said Greenlee.

The backend of the season was spearheaded by a balanced attack from Jordan Matthews, Emanuel Wilson, Ruddell, Brent Hatten, and Jalen Meeks who averaged over eight points per game. The Cougars also had five players average over four rebounds per game: Ruddell, Landon Gladney, Liam Cameron, Hatten, and Jordan Matthews.

“What makes us pretty special is that we have five or six guys on any given night that can score 15 or 20, and did,” Kollar said. “There are many times when we had six guys in double figures.”

“Everyone wanted to win and we acted like it on the court and off,” said Ruddell. “We all wanted each other to succeed as much as we wanted to ourselves.”

With some key players from this year’s team set to return next year, a conference championship in 2023 is not out of the equation. The players and coaches have had that taste of winning and it will drive them to work even harder going into next year.