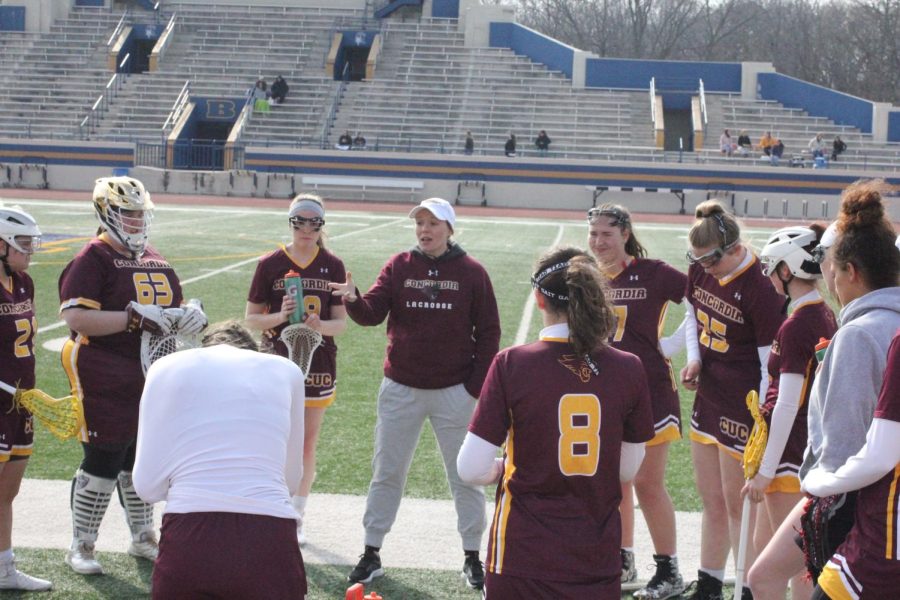 The Concordia University Chicago women’s lacrosse team had an outstanding 2021 season, but new head coach Fran Meyer doesn’t want the team to rest easy on their past victories.

CUC hired Meyer to be the new coach in early January. She joined the Concordia community on Jan. 17.

“Coach Fran,” as her players call her, is from the Chicago area. She attended Montini Catholic High School where she earned four letters playing varsity lacrosse, and she was the varsity MVP from 2010 to 2012. During high school, Meyer was also a member of the Illinois team at the U.S.A. Lacrosse National Tournament.

Meyer played at the Division I level at Marquette University from 2014 through 2017, then moved on to coach club and high school programs, including her most recent position coaching her old high school team at Montini.

The previous women’s lacrosse coach, Nathaniel Davis, stepped down in the fall but he reached out to Meyer and recommended the job to her. At the time, Meyer was and managing her mother’s wholesale artisan bakery.

“It seemed to all fall into place,” said Meyer. “I got a call from the previous coach that a spot was opening up, my family lives out here, and I have always wanted to coach at the collegiate level.”

As soon as Meyer stepped on campus, she set up individual meetings with the players, then kicked off team practices a week later on Jan. 24.

The team includes 11 out of the 14 players last year’s season, when the Cougars finished with an 11-2 record. They defeated every opponent except for Aurora University, who bested the Cougars twice.

Despite last year’s successes, Meyer looks to build a team that is not simply coasting off that momentum. “Every coach is different,” said Meyer. “I feel confident in my ability to create a fun, positive environment that can motivate and lead this team to be successful without having to lean on what last year was.”

The team and the coach often take part in team building activities such as the human knot, which is when team members reach into a huddle and grab each other’s hands, then have to untangle themselves without letting go. Meyer also holds frequent team meals.

Lacrosse team members speak highly of Meyer’s ability to bring them together on and off the field. “The coach’s priority of team building is already changing the team’s dynamic for the better,” said senior midfielder Elizabeth Cyrwus. “The fact that she uses team building exercises inside and outside of practice is seen through the growing connection and chemistry between our teammates.”

Elizabeth Cyrwus broke the school record of most points awarded on April 2 with 10 goals and 2 assists. Along with this achievement, she was named the NACC Offensive Player of The Week for both the week of March 23 and April 2. Alongside of Liz Cyrwus, her sister, Emily Cyrwus was honored with the defensive title on the week of March 23 with Cougar goalie Ryan McGee earning the defensive title on April 2.

“With the skill level of the girls, and my experience as a Division I athlete, we can go pretty far,” said Meyer.