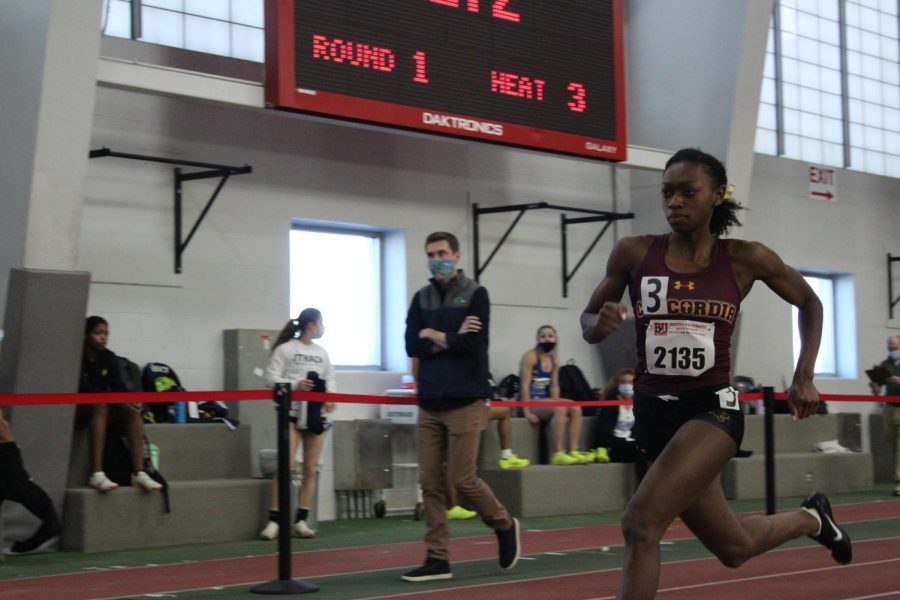 Five outstanding women athletes on the Concordia University Chicago track and field team traveled to Boston University on Feb. 11 and 12 to compete against Division I, II, and III schools at the David Hemery Valentine Invitational.

“I got to jump against girls who were jumping 40 feet plus,” said CUC long and triple jumper Zahra Sammour, a junior.

Sammour had already placed in the top six in five different meets throughout this season and was excited to compete in this invitational. “I saw girls there that lived and breathed track and field,” said Sammour. “That’s the motivation you need to be around to get into beast mode.”

At the Valentine Invitational, Sammour placed fourth in the triple jump with 11.76 meters and reached 5.22 meters in the long jump, placing 16th. Sammour’s triple jump landed her the best performance among the other Division III athletes in this event, and the eighth best in the country.

Senior Madeline Bobinski’s highest and final shot put covered 12.39 meters. This throw placed her 11th overall and in second place among the other Division III athletes. “From a fifth year’s perspective, it was amazing to be able to see how these top schools not only compete individually, but how the team dynamic is as well,” Bobinski said.

Bobinski has been throwing the shot put for nine years. While a student for two years at Harper College in Palatine, Ill., Bobinski competed at the National Junior College Athletic Association Track and Field Championship. During her second year at that competition, she earned first place in the javelin throw.

Bobinski continued competing in throwing events after she transferred to North Central College in Naperville, Ill. While at North Central, she moved up to the third spot out of 10 for shot put with a throw of 13.10 meters, and gained a spot in the top 10 for javelin.

“It was great competing in the Boston meet,” said Bobinski. “Being around those other division schools was just interesting to see how they compete.”

Senior Kayla Armstrong also faced serious competition at the invitational in the 200-meter and 400-meter races, but she did not count the field among her toughest opponents. “I have competed against Olympians before, so this was a little below that,” said Armstrong.

Simone Wilson, a graduate student at CUC, also competed in the 400-meter dash and 200-meter sprint alongside Armstrong. Wilson ran the 400-meter in 57.00 seconds, setting a new personal record. She ran the 200-meter with a time of 25.82 seconds, placing 75th.

Each of the CUC athletes achieved some of their best personal times, jumps, and throws of the season in Boston. “The thing about this meet is the opportunity to be able to compete with people from D-I and D-II schools,”said Sammour. “This is huge for D-III. Especially when we get the chance to place.”