Artists of Concordia Theater Face Tragedy in “The Women of Lockerbie” 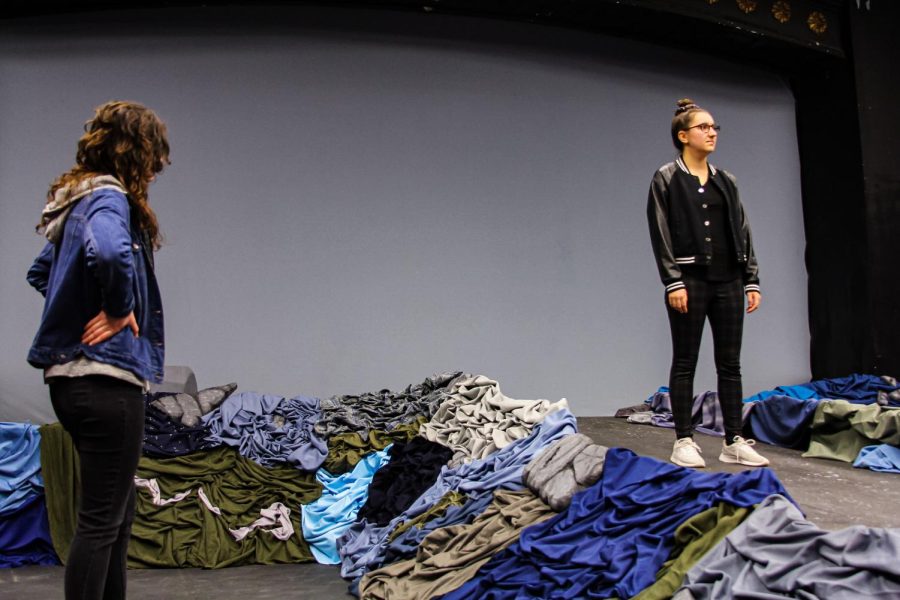 Left to right: freshman Anika Slayton, and senior Hannah Sochowski rehearsing for "The Women of Lockerbie" in the Bergman Theater.

Artists of Concordia Theater (ACT) are ready to show off their latest production, “The Women of Lockerbie.”

The tragic drama takes place in the aftermath of the Dec. 21, 1988 bombing of Pan Am Flight 103. A bomb detonated on board the Boeing 747 aircraft as it was making a transatlantic flight from Frankfurt, Germany to Detroit. The plane crashed into the small town of Lockerbie, Scotland, killing all 243 passengers, 16 flight crew, and 11 Lockerbie residents.

Written by American playwright Deborah Brevoort, “The Women of Lockerbie” portrays a fictional New Jersey mother named Madeline Livingston, who loses her son in the crash. Madeline sets off to Lockerbie to find her son’s remains. The poetic drama about the triumph of love over hate is written in the structure of a Greek tragedy.

“To me, the play is about everything we need,” said theatre professor Brain Fruits, who directed the performance. “Now more than ever, theater is all about holding a mirror up to society.”

On the mother’s journey, she meets residents of the Scottish town who are gathering the clothes of the passengers, washing them, and returning the items to the victims’ families. Although the characters are fictional, the story is based on real women from Lockerbie who eventually recovered more than 11,000 items of clothing from the crash site.

In 2003, the government of Libya under Muammar Gaddafi took responsibility for the bombing, eventually paying $1.5 billion in compensation to the families of the Lockerbie victims and several other terrorist attacks.

“It’s one of the biggest tragic losses in the history of the world,” said Fruits. “There were so many casualties and it  took a lot of time to rebuild.”

When “The Women of Lockerbie” was originally published in 2001, the play won the Kennedy Center Fund for New American Plays Award, along with the silver medal in the Onassis International Playwriting Competition.

ACT has been rehearsing the play since before winter break. “They work hard,” said Fruits. “They’ve improved so much. Half the cast has to speak in a Scottish dialect, which is really hard, very tricky and the cast is embracing it.”

“There are some lines in the play where I can’t make eye contact with the person in front of me,” said senior Hannah Sochowski, who stars as Madeline Livingston. “The emotion and lengths I have to take to play the role of a mother is just crazy.”

“Sometimes we can’t help but snap out of character, because the acts are just so intense,” said freshman Anika Slayton, who plays one of the Scottish women.

“My favorite line is actually near the end of the play,” said stage manager Emil Clausing, “It’s, ‘I just I don’t know if I can do this.’ I think that’s so relevant because I don’t know why I have the strength to do this and I try all the time. No one else is, so I keep going.”

“The Women of Lockerbie” will be performed in the Bergman Theater at 7:30 p.m. on Friday, Feb. 25 and Saturday, Feb. 26, followed by a Sunday matinee performance on Feb. 27 at 2 p.m. Attendance is free.