“One of the best things we do,” Lessons and Carols kicks off the holiday season 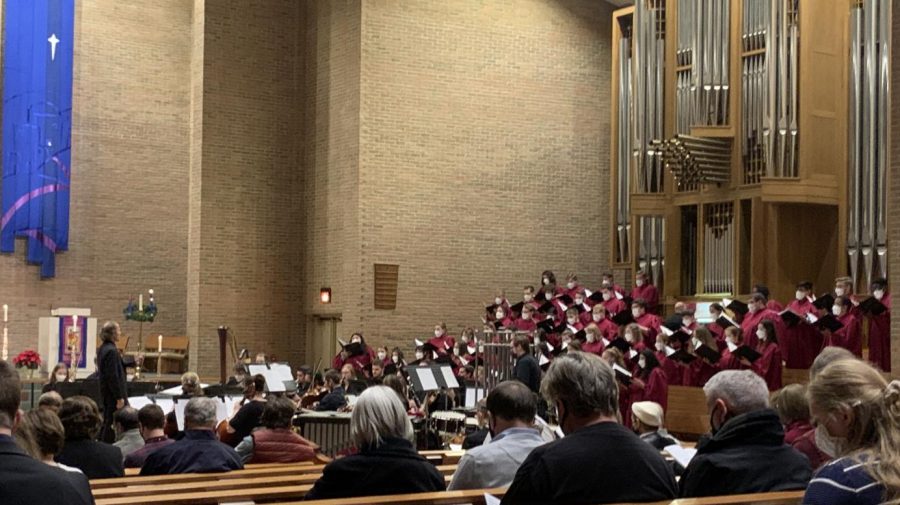 The combined choirs and orchestras perform during the Lessons and Carols service on Saturday, Dec. 4, 2021.

A clutch of student greeters waited outside the the doors of Our Chapel of the Lord on Saturday Dec. 4, with a smile to welcome the Concordia University Chicago community back to the first live “Lessons and Carols” concert since 2019. The chapel was already buzzing with excitement for the performance to come.

Following pre-service music from the Handbell Ensemble, the Chamber Orchestra, and organist Steven Wente, BA ‘75, MCM ‘76, the combined choirs filed into the chapel with the hymn “Once in Royal David’s City.” The two-hour worship service included Christmas classics like “Silent Night” and “O Come, All Ye Faithful,” along with a variety of other traditional and contemporary songs.

The performance was the second of three worship services conducted over that weekend, led by university pastor the Rev. Jeffrey Leininger, Ph.D., each showcasing six different musical groups and featuring nine guest readers.

This was the first time the “Lessons and Carols” allowed a live audience after COVID-19 forced the chapel to close its doors to participants only, although CUC broadcasted the annual holiday concert online in 2020. “It’s right that we be together celebrating the birth of our savior,” said university president Russell Dawn, D.Phil. “Then we do so with the words of scripture and the beauty of music, both of which are both gifts from God.”

Kapelle soprano Joy Greco expressed a similar feeling when she entered the chapel to perform before the congregation. “I was overwhelmed with joy the first time I walked in,” said Greco. “Last year, we had to film it, and there was no one in the chapel. It was just bare. It was wonderful having everyone there, and the congregation singing was amazing.”

Planning for the production began as soon as students arrived on campus in August. “It takes really all semester in terms of the music, since they begin working on things and planning for it several months in advance,” Pastor Leininger said.

Entering his twentieth year at CUC, Pastor Leninger feels grateful to be part of one of CUC’s longest traditions. “It’s the greatest joy of my work here to participate in this, and to have the excellent musicians, students, and faculty that are involved in it,” said Pastor Leininger. “This is one of the best things we do, and it has a long rich history. I’m just glad I can be a part of it.”

The worship concluded with a candlelight choir performance of “Noël, Noël,”  which was composed by Carl Schalk HS ‘47, BS ‘52, who passed away this year. “It just had a whole new meaning this year, and it’s such a beautiful song,” said Greco. “Then with the candlelight, it’s so serene.”

Reflecting on the service, President Dawn said that he was most moved by the Sixth Lesson highlighting the Holy Birth. “The beauty of ‘O Magnum mysterium’ combined with the profound truths in the word, and it’s a mixture of English and Latin,” said President Dawn. “It’s typically profound to see it in the old language and our language.”

After the worship service, the congregation members filled the chapel lobby and surrounding areas. With smiles on their faces, family members embraced one another and congratulated the participants for the excellent performance. “I’m extremely grateful for all the work that went into this,” said President Dawn. “The student, staff, faculty, just lots of thoughtful and probably agonizing work because of the level of perfection. It was just beautiful and meaningful, and I just appreciate it.”

Pastor Leininger walked around and shook the hands of congregation members, and embraced the students who performed. “We’re meant to be together, and it was a thrill to see everyone,” said Pastor Leininger. “The Incarnation, which is God becoming flesh in baby Jesus, brings us together. So what better way to celebrate it than in person together?”