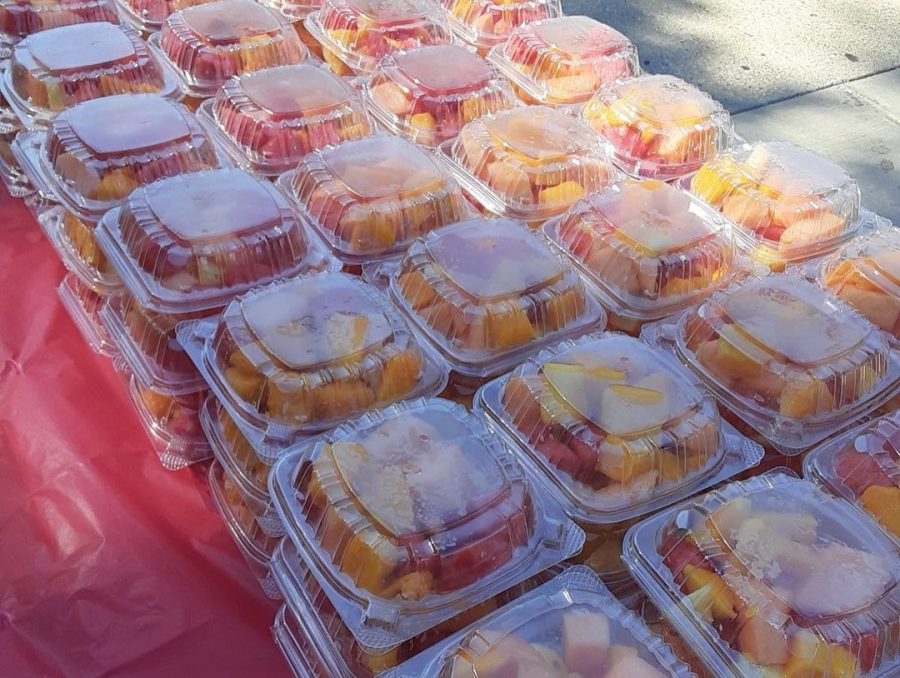 Fruta en vaso, or fruit cups, ready to be given out for the kickoff event on September 15 at the Triangle.

Every year, starting on September 15, Hispanic communities all around the world come together to celebrate the anniversary of independence for Latin American countries. In addition, Mexico and Chile celebrate their independence days on September 16 and September 18, respectively. Everyone has their way of celebrating this special time of year, and Concordia University Chicago is no different.

After a COVID-19 quarantine in 2020 canceled all Hispanic Heritage festivities, CUC students and staff members were excited to finally have the chance to make up for the missed holiday. Even with COVID-19 risks still factoring into any gathering, the Hispanic community here at CUC was not going to be denied another year of celebration. And thanks to the Latino Student Union (LSU), everyone who attended and participated in each event in the past month had a great time.

Michelle Medina, the president of the LSU, takes a lot of pride in representing her culture during this special time. “For me, Hispanic Heritage Month is a time where we get to present our cultures to other cultures here at Concordia,” Medina said. “It’s also a time to really show how proud we are of our culture.”

Ricardo Ruiz, another member of the LSU, helped the organization represent the Latino community. “We get to show others what it is to be Hispanic,” Ruiz explained. “That includes showing off the different dances, foods, and religious aspects of Latin America.”

The Hispanic Heritage kickoff event took place on September 15 in the Triangle. Two famous Mexican snacks, elotes and chicharrones de harina, were handed out to students and staff to sample.

“Elote” literally translates to “corn cob.” Mexican elote is grilled corn on the cob slathered in a mayonnaise cream sauce. It is then topped off with chili powder, cheese, and lime. The elotes were provided by former CUC student Vanessa Vergara, whose family runs a business here in Chicago.

Chicharrones de harina, fried flour wheat crisps, are another popular Mexican snack. Similar to how hot dogs and ice cream are sold in America, elotes and chicharrones are sold in Mexico at places like stadiums, roadside stands, and market stalls.

The next Hispanic Heritage event on September 16 opened the doors to showcase a wider variety of Mexican snacks and drinks. This event featured Mexican street food such as elote en vaso (corn in a cup), fruta en vaso (fruit in a cup), chicharrones de harina (fried flour wheat crisps), and horchata (rice water). Mexican horchata is a famous Mexican drink in which white rice and cinnamon are mixed in water with sugar and spices. Other Latin cultures make horchata somewhat differently from Mexico, but the recipes are similar.

On September 30, the LSU hosted another food event in the Triangle showcasing churros. Churros are fried dough that are generally covered in powdered sugar and can be filled with chocolate or other flavors.

As expected, the churros were a school favorite and this event was highly anticipated. “We brought in over 400 churros,” Ruiz said. “By the end of the event, all 400 churros were eaten.”

On the same day, the LSU collaborated with the Campus Activity Board (CAB) to host a Salsa Night from 3 p.m. to 5 p.m. Students danced to salsa music and even learned how to dance the salsa, a type of Latin dance that was first popularized in the 1960s in New York City and remains popular to this day. “I feel like dancing is a big part of the Latino culture,” Medina said.

Thanks to the LSU and CAB, the Latino community of Concordia University was able to enjoy a time of celebration and pride while also remembering the independence of Latin America from Spain. LSU intends to make next years’ Hispanic Heritage Month just as special, with planning for even more events already underway.